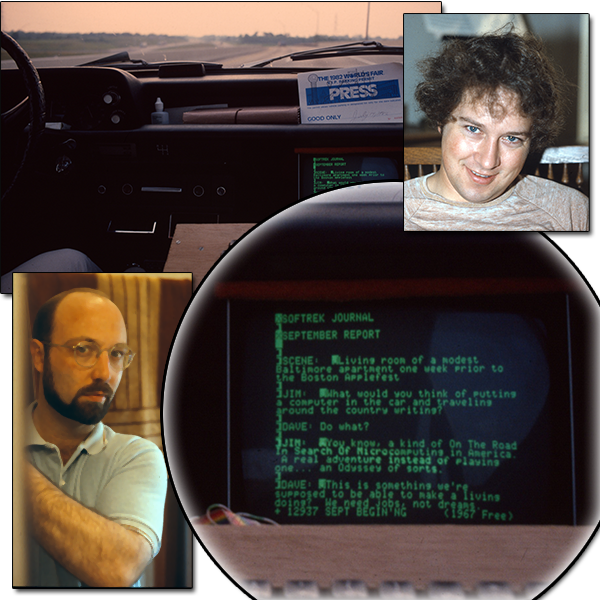 After posting the first two "More to the Story" articles about "Softrek Going Mobile" adventure (Part 1, Part 2), I decided to dig a little deeper to see if I had any more slides from our Softrek travels. And indeed there was; a whole roll's-worth box with a few gems – shots of Bear working on the Softrek computer before we hit the road, a selfie of me taken in my bathroom mirror, more on the road photos, and one of the Softrek-mobile parked outside a local authorized Apple dealer store.

While on the road with Softrek, we served as Softalk's "Ambassadors of Good Will and Cheer." Dave "Bear" Fitzgerald and I stopped at authorized Apple Computer retail stores whenever we had a chance. Among the newly discovered photos, the one at the Apple computer store was perplexing. I could not remember where this MCS Inc. computer store was. So wannabe History Detective that I am, I thought, "What are the chances?... No way... after all these years... But what the heck. It's easy enough to check it out." So the game was afoot! :-) 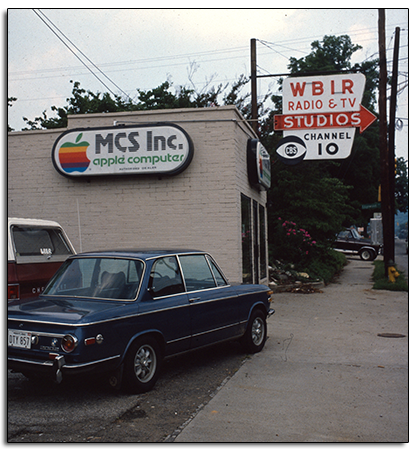 My most obvious clue from the photo was the "WBIR Radio and TV Studios" sign popping up toward the rear of the MCS store. So a quick search told me that WBIR is now the NBC affiliate in Knoxville, Tennessee. I went to the station's website, checked out the About and Contact pages, and found a live map. I clicked on it and zoomed in. But... it just didn't look right. Sure, a lot would have changed in thirty years, but I didn't see anything like in the photo.

But now I knew that MCS Inc. was in Knoxville, and it had been an Authorized Apple Computer dealer. So on to step 2.

I next selected the footer text for the address: 2831 Broadway, Knoxville, TN 37917, right-clicked and did a web search... and WHAM, again!!! :-) Not only is MCS Service, Inc. still in business; they are in the same wonderful location with a fresh coat of paint (and it looks like WBIR is no longer a neighbor). I resized the window and scroll-wheeled in from the map to 'Street view' and there you have it: 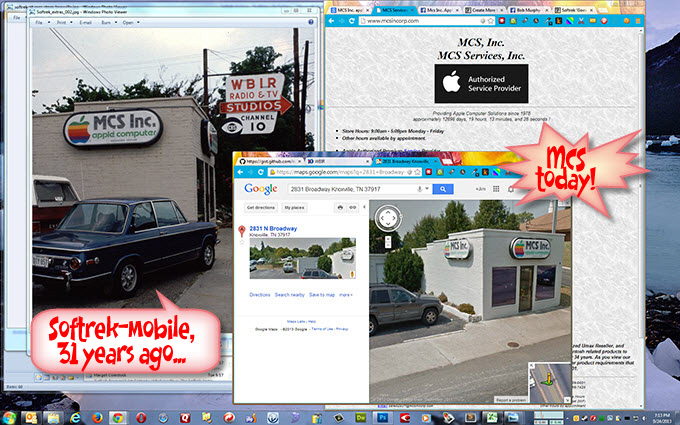 After thirty-one years, so much has changed... well, except for MCS Services remarkably not only still being in business but doing it all these years in the same location! What is so amazing is how quickly and easily I not only figured out where this picture was taken, but I went zooming in on a "live map" on the Internet that let me do a virtual visit from my office chair in Cedar Rapids. I used the camera controls to walk around the store, up and down the street, even get as close as I could to the position I used to take the original photo.

With this much progress in just over thirty years, imagine what is ahead in the next thirty!

WBIR is still in the same location, it's one block over from MCS. I found your site this morning by googling MCS to find what time they opened (9am). I have some vintage MACs that have been in storage and I'm taking them there to see if they would like to have them, as well as a macMini that needs repair. If you are interested the Macs I'm taking this morning are the last tower before iMac was introduced (running system 8 I think), and a cube. I also have the monitor that went with the cube originally and later was used with my mom's macMini. I'm also taking an HP1120 inkjet that prints up to tabloid size with a SCSI interface. It was used with the cube and the tower, both, I think. If they don't want the old macs at MCS and I bring them back home, is someone here interested?

That is SO COOL! Thank you for contacting us. There are a WHOLE bunch of things I'd like to follow up with you about, but let's deal first with your hardware donations.

Did MCS take whatever you offered? If not, I would like to get you in contact with Tony Diaz who is our "Computer Gaming & Vintage Hardware SIG" member. He can surely help you with finding quality, appreciative homes for your no-longer-needed computers, etc.

Once your "hardware adoption" issues are taken care of, would you do the STAP project a HUGE favor? :-) Would you consider a follow-up visit to MCS to interview them and take a few photos to contribute a "Where are they now?" story to our site? Things of interest... Is there anybody there that remembers the Softrek visit from 1982? What has it been like to be an authorized Apple dealer IN THE SAME LOCATION for over 30 years? Stuff like that.

If you could do an interview but do not have time for writing a story, if you taped the interview and provided an audio file, we can take excerpts from it and wrap a story around the audio interview. Whatever would work for you.

Thank you again for contacting The Softalk Apple Project... but more than that, thank you for being an MCS customer.

Best Regards,
--Jim--
on behalf of the STAP project