While scanning the January 1981 issue recently donated to The Softalk Apple Project document archive by Steven Brosch, my eye caught an asterisked footnote on page 34. And with that, this little "History Detectives" game was afoot! 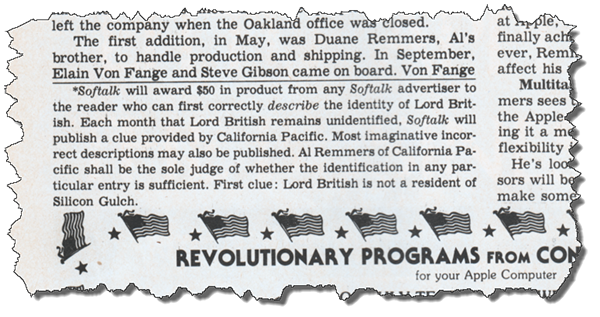 This "Who is Lord British? Contest" has got to be one of the more unusual examples of Softalk's frequent use of contests, puzzles, polls, and other techniques to actively engage its community of avid readers. Softalk contests were most often headline articles in their own right. This one apparently was a subtle entry intended for the interest and pleasure of the focused, detail-oriented reader. 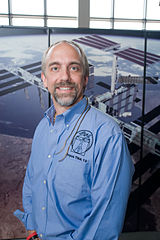 As shown above, the Lord British contest was announced in a footnote of the feature article company profile about California Pacific. The terms of the contest include the roll-out month-by-month by Softalk of clues to help identify the person known as Lord British. For those not around at the time or who may have forgotten, Lord British was the pseudonym of Richard Garriott de Cayeux, the legendary designer/developer of the Ultima series role-playing games among many other creative works and accomplishments.

But wait! This was Softalk remember. Look more closely at that contest announcement. Notice the italics on the word 'describe'? And what are we to make of the statement, "Most imaginative incorrect descriptions may also be published." What were the devious minds up to at Softalk when they launched this contest? And what, in turn, was in the minds of readers who responded?

My guess is that a bunch of folks knew who Lord British was and quickly answered the question... but maybe not. A lot turns on that italicized word to 'describe' the identity of Lord British, don't you think? Folks with physical copies of the magazine can well chase this down in the here and now. But there just may be some member of the Softalk Forever!!! Facebook group who remembers these details. I'll post a pointer to this article over on the Facebook group and update here as new details emerge.

Once we have the complete story, we will update the Lord British Wikipedia page with this historic tidbit and reference this article for the details. So... I'm off for the moment to seek answers to these burning questions over on Facebook...